In 1933, Samuel Bloomfield started in the business of manufacturing display and pie cases in a 2,000 square foot plant in Chicago. His sons, Daniel and Harold, assisted in the business. In 1935, they began adding small ware items such as sugar pourers, kitchen utensils, salt and pepper shakers.

Between 1939 and 1941, rapid business growth allowed them to expand the business to a 55,000 sq. ft. building. At this time, the Bloomfields became very active in government business and, with the onset of World War II, did a sizable business with government contract offices. They continued to add a variety of smallwares to their growing product lines.

Samuel Bloomfield passed away in 1954, and Daniel and Harold Bloomfield took over the 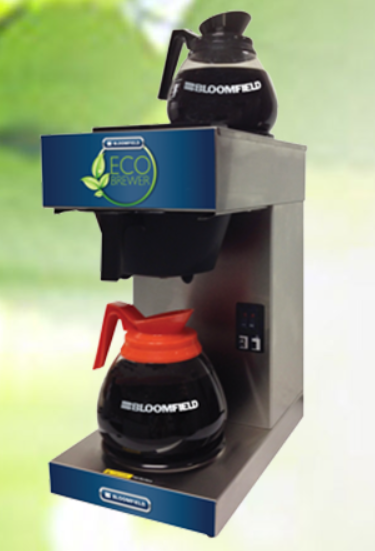 business. The product line was expanded to several hundred products creating the need for 93,200 sq. ft., plus 320,000 sq. ft. of vacant space for future expansion at 4546 West 47th Street in southwest Chicago.

In 1964, Bloomfield was acquired by Beatrice Foods Company but operated independently under the established management. The company continued to expand their business in the foodservice industry, as well as the custom deep drawn stamping business and stainless steel medical products industry.

In 1984, Bloomfield along with four other Beatrice companies, Market Forge, Wells Manufacturing, Taylor Freezer and World Dryer, were purchased by an investment firm and structured under the corporate umbrella of Specialty Equipment Companies.

In 1985 it became part of the Chicago-based Specialty Equipment Companies, Inc. (SEC) In 1993 SEC relocated Bloomfield from Chicago and merged it into the Wells operations in Verdi. In addition to Wells/Bloomfield, Specialty was the parent of four other manufacturing divisions: Taylor Company, the world’s foremost producer of soft-serve ice cream and shake machines; Beverage Air, which makes commercial refrigeration and reach-in coolers; Carter-Hoffmann, a leading supplier of holding, transporting, rethermalizing and serving equipment; and World Dryer, a manufacturer of commercial wall-mounted hand dryers.

Among Bloomfield’s major products are coffee and iced tea brewers, coffee warmers, insulated beverage dispensers, and glass coffee pots with customized silk screen graphics. Beverage equipment continued to be a major thrust for the company and had now grown to be a substantial part of the total business mix. Bloomfield had become a solid number two in beverage equipment and supply sales, displacing some long term competitors in the industry.

In 2000 all of the SEC divisions were purchased by United Technologies and became a division of Carrier Commercial Refrigeration, Inc.

In August 2007, Wells Manufacturing Co. and Bloomfield Industries, Inc. were purchased by the Middleby Corporation and renamed Wells Bloomfield, LLC.

Today Bloomfield supports a sales force of 25 in 25 territories throughout the U.S.. Bloomfield has offices in Holland and Taiwan to address foreign market opportunities. The company has 1200 active distributors in the foodservice industry and 6700 Office Coffee distributors.